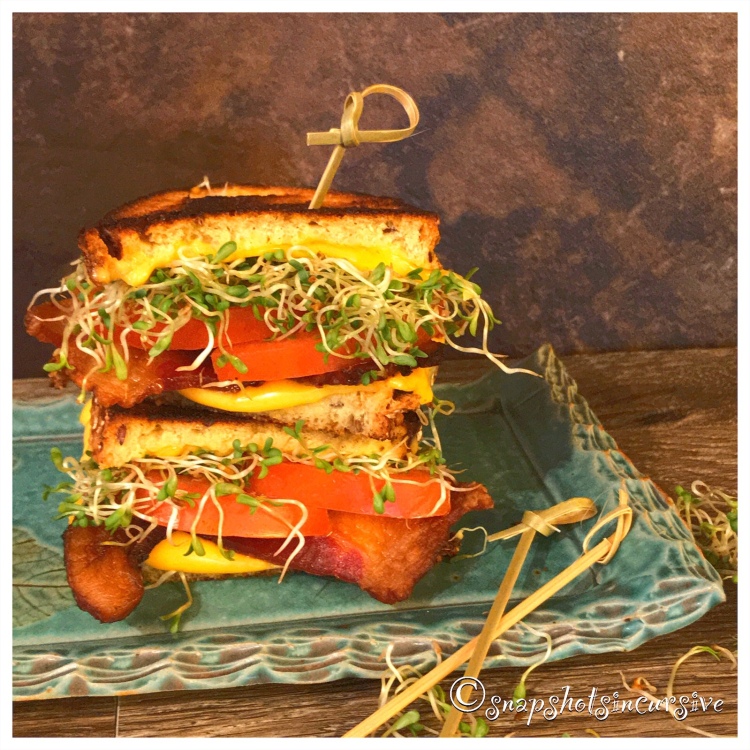 What’s Cooking in Gail’s Kitchen? Clean Eating: Quinoa Cheese Melt! Few things can take the place of the classic grilled cheese sandwich, in my opinion. Yet, in a world of imagination, anything goes. As long as the bread is crispy with a satisfying crunch, be inventive. Think about multigrain, brioche, sourdough, bagel, or baguette. Once that decision is made, take a look at the cheese options: cheddar, American, gouda, provolone, gruyère, or Swiss. Sometimes a mixture is the perfect choice. Layering extras can be just as mind boggling. Do you choose bacon or beef? Lettuce or sprouts? Tomatoes or onions? I can see your eyes darting in several different directions casting a puzzled look on your face. So the next time someone asks, “Should we have grilled cheese?”, simply throw your arms up in the air and say, “Sure! It’s easy for you to say!”

Preheat skillet over medium heat. Butter one side of quinoa multigrain bread. Place butter side down onto skillet bottom. Add four slices American cheese, stacked two high, to cover surface of bread. Arrange cooked bacon over all. Butter a second slice of quinoa multigrain bread on one side. Place butter side up on top of sandwich. Grill until lightly browned, then flip over. Continue grilling until cheese is melted. Remove to a plate. Stuff with sliced tomatoes and alfalfa sprouts. Cut in half. Serve immediately.

What’s Cooking in Gail’s Kitchen? Clean Eating: Frittata Egg White Muffins! Egg whites are probably the most misunderstood superfood. They alone are responsible for muscle gain and brain function. The high protein content can boost immunity levels as well. So why is it people turn up their noses when you mention egg whites? Personally, I think it may have something to do with the extra work involved in separating the yolk from the white. As we have teeter-tottered back and forth between the medical community urging us to ditch the yolk because of its fatty content and then backpedaled with discoveries that perhaps now it had nothing to do with heart disease, is it any wonder we stand around scratching our heads? Long story short. Eggs aren’t unhealthy, so do what you want.

Preheat oven to 350°. Spray a mini muffin tin with nonstick oil. Set aside. In a bowl, whisk together egg whites, green peppers, red peppers, sweet onion, seasoned salt, and black pepper. Fold in crumbled bacon and cheddar cheese. Divide the mixture evenly among the mini muffin pan cups. Bake 15-20 minutes, or until egg whites are fully cooked. Remove the muffins from the oven and allow to cool for 5 minutes. Loosen and remove from pan. Top each egg white frittata with chopped chives and alfalfa sprouts. Serve immediately.

What’s Cooking in Gail’s Kitchen? Talking Points: Gluten-Free Egg Shoyu! Have you ever wondered how to make those awesome tasting hard-boiled eggs you find nested in a bowl of ramen noodles? The whites are tender; the yolks a gorgeous shade of golden yellow. That slightly salty taste, combined with a hint of sweetness, is the result of marinating the peeled eggs in a soy sauce mixture. I’m not going to lie, that’s the step you need to do in advance. The marination process can take anywhere from 8 hours to 24, depending on the depth of saturation you desire. Its purpose is to allow the natural salt to season the egg yolk. In the end you achieve a perfect ring of tawny brown to outline the incredible edible egg.

Everything But Bagel Seasoning, for garnish

Remove the shells of the hard-boiled eggs. Discard. Place the uncut eggs in a deep bowl. In another bowl, whisk together the warm water and sugar until dissolved. Add sherry vinegar and soy sauce. Stir to combine. Pour the soy sauce mixture over the eggs. You want them covered and submerged. Sometimes it is necessary to place a plate over the eggs so they do not float. Marinate the eggs for 8 hours or overnight. Remove the eggs from the sweet and salty marinade. Transfer them to a sealed container for up to three days. When ready to eat, cut the eggs in half lengthwise. Sprinkle, or dab, with Everything But Bagel seasoning. Serve with rice or noodles. 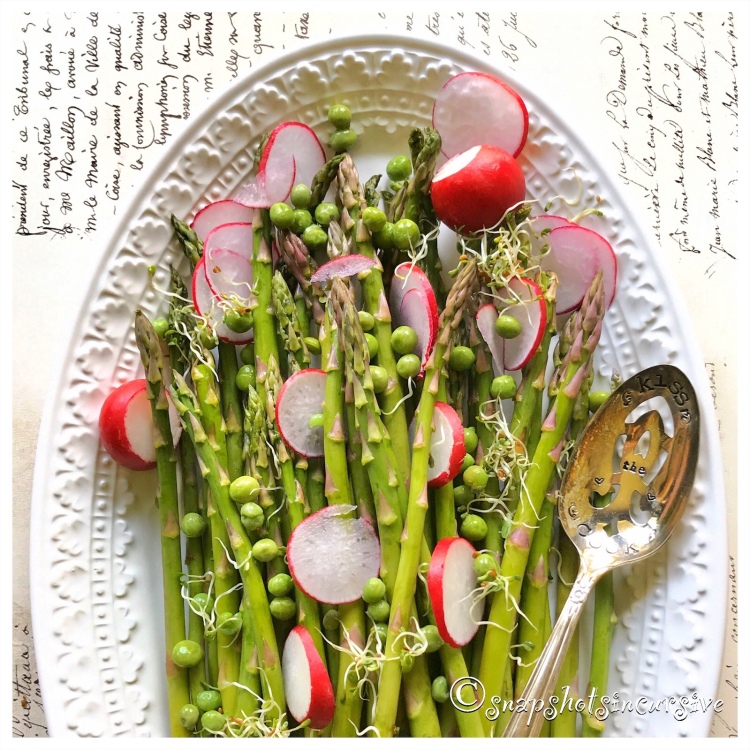 What’s Cooking in Gail’s Kitchen? Talking Points: Asparagus If You Peas! When you’re looking for an appealing salad, think asparagus! You’re going to love the bright greens and vibrant red tones in this one. You may even “Kiss the Cook”. By blanching fresh asparagus, it keeps this popular vegetable tender while remaining crisp. The mild flavor reminds me of Springtime as a kid. I used to forage for wild asparagus along country roads, ditches, and abandoned railroad tracks. The natural pale-green spears standing sentinel made them easy to spot. Everyone had their “secret” places where they knew the plants returned year after year, as long as the stalks were snapped off at ground level leaving the roots intact.

ASPARAGUS IF YOU PEAS

Bring salted water to a boil in a large saucepan. Place asparagus spears in water to blanch, about 3-4 minutes until tender. Remove asparagus with tongs and transfer to a colander in ice water for one minute. Drain. Arrange asparagus spears on a platter. Surround them with peas, sliced radishes, and alfalfa sprouts. Place in refrigerator to chill completely. Meanwhile, to make the dressing, combine raw honey, mayonnaise, Dijon mustard, white vinegar, and cayenne pepper. Whisk until smooth and creamy. Drizzle over vegetables, as desired.

What’s Cooking in Gail’s Kitchen? Waste Not, Want Not: X-treme Everything Deviled Eggs! When it comes to deviled eggs, you hear a plethora of descriptions ranging from “world’s best” to “million dollar” to “dangerously good” deviled eggs. But here’s the catch: Everyone has a different number of taste buds. They extend beyond your tongue to include the roof of your mouth as well as the inner cheeks and throat. What you find appealing may not interest me in the least. Here’s a good example. Everything But Bagel Seasoning contains garlic, onion, poppy seeds, and sesame seeds. While it may make your heart flutter sprinkled all over a freshly baked bagel, it may sound completely gross mixed in a deviled egg. On the other hand, when I topped the deviled egg with a clump of newly grown alfalfa sprouts, my taste buds did something similar to a TikTok dance. Just saying.

1 tablespoon Everything But Bagel Seasoning

Peel the prepared hard-boiled eggs. Slice in half horizontally. Carefully remove the solid yolks and transfer to a small bowl. Place the egg whites on a serving platter. Using a fork, mash the egg yolks into a fine crumble. Add mayonnaise and softened cream cheese. Mix until smooth and creamy. Fold in Everything But Bagel Seasoning. Spoon the yolk filling into the egg whites. Sprinkle more seasoning on top, if desired. Garnish deviled eggs with a crown of fresh alfalfa sprouts. 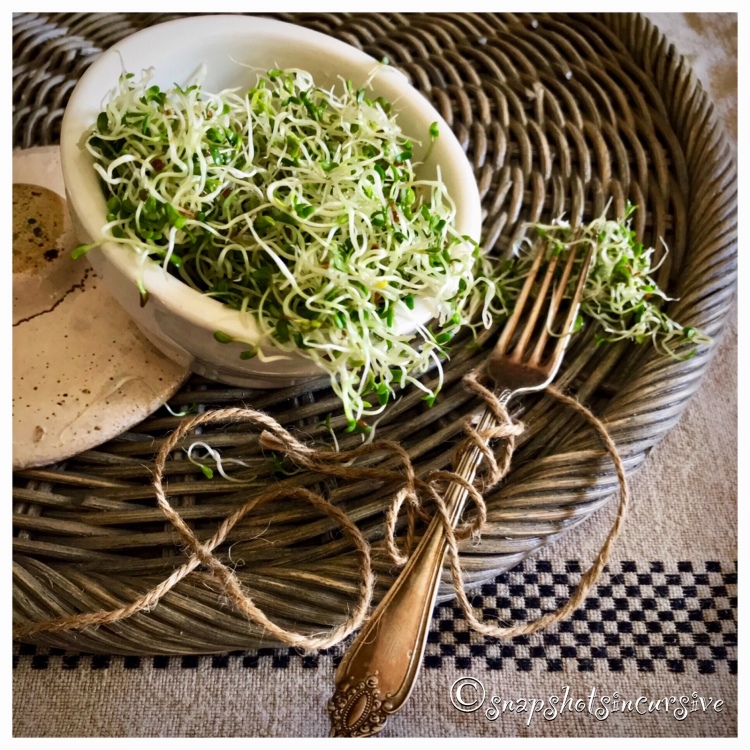 What’s Cooking in Gail’s Kitchen? Fab Foodstuff: Alfalfa Sprouts at Home! Remember the time you stopped at the corner bistro for a super-healthy bite to eat? You know the sammie. It’s made with the crusty artisan bread, hearty summer veggies, creamy herbed cheese, and stacked high with alfalfa sprouts instead of lettuce. Afterwards you thought, “Hey, I can make this at home.” So you went to the grocery and found everything you needed…except alfalfa sprouts. What’s up with that? Unfortunately, alfalfa sprouts are extremely vulnerable to contamination for one reason or another. A lot can go awry from harvesting to produce aisle. Problem solved. DIY kits are available, along with certified organic seeds. Now you, too, can enjoy one of the most nutritious greens around. Supplies include a quart jar, screening lids, and seeds. You’re welcome.

Measure dry seeds and place in a quart canning jar. Add warm water. Soak overnight. The next morning, use a fine screen top to drain all the water. Do not soak again. Rinse the seeds under a faucet using tepid water. Gently swirl and drain. For faster growth, repeat this process again in the evening. Place the jar at an angle with the screened lid facing down. This allows proper drainage and ventilation. Repeat on Day 2. As the sprouts grow, change to a larger screened lid. You will notice the seed hulls wash away during rinsing. By swirling under running water, most hulls are flushed out through the lid. This may take two or more rinsings. Drain well. Continue to rinse and drain every 8-12 hours. Harvest on Day 6 when the leaves are open and have mostly turned green. Store finished sprouts in the refrigerator until ready to eat.

What’s Cooking in Gail’s Kitchen? The Next Step: Bird’s Nest Breakfast! For something fun, take an ordinary poached egg, lay it on a bed of greens, and turn it into a festive meal nestled in a coffeehouse cup. Sounds simple, doesn’t it? But you like toast, you say. No worries, it’s in there. Think about this attractive alternative when serving a mid-morning brunch for two or breakfast in bed on the weekend. This is how we cruise through life.