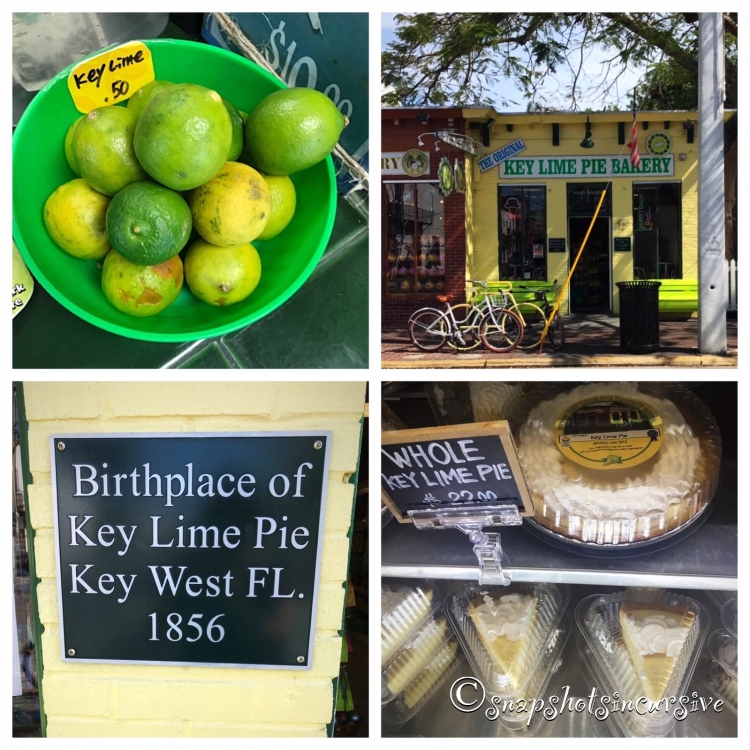 Dining Outside the Home: Key Lime Pie Bakery! Key limes are as popular in the Florida Keys as conch shells on the beach. If you’ve never tasted one, imagine this: Key limes are more aromatic as well as a bit smaller than regular limes, thus making them less acidic and more tart. By adding sugar, eggs, and a graham cracker crust, the results are a tangy, sweet, light, and creamy dessert that may or may not cry out for a delicious dollop of whipped cream. Merengue is definitely not out of the question either. Drop in for a single slice or an entire pie. It’s convenient enough to make a second trip. 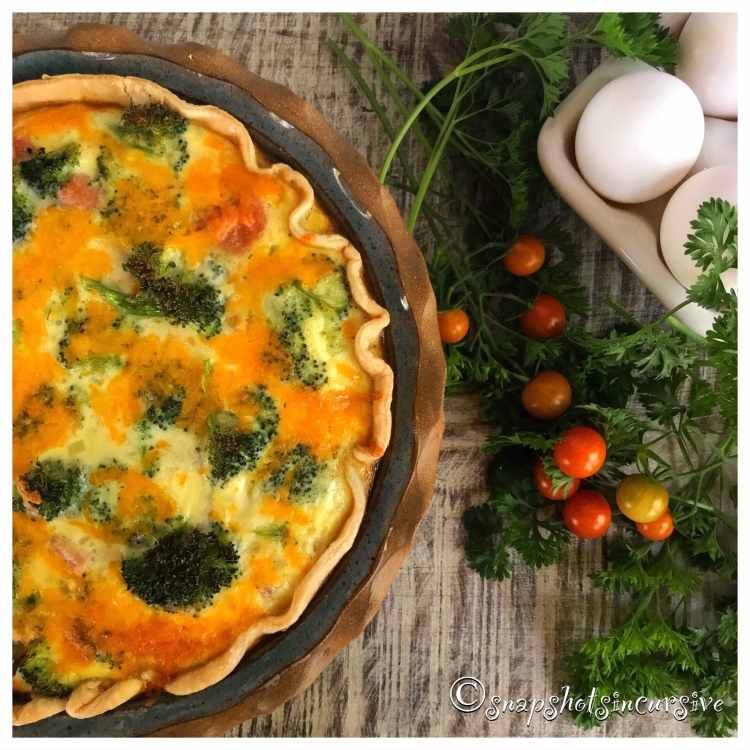 What’s Cooking in Gail’s Kitchen? Enjoyable Eats: Quiche From the Hen House! Certain foods are like time-travel. Take quiche, for instance. Elsewhere it’s no big deal, popular even. But in America, guys couldn’t stand it back in the ‘80s. Too sissy. Never mind that it was economical and the ingredients were pretty much on hand when the grocery budget was stretched to the max. But then came bacon, and everything changed. Suddenly quiche was raised to the level of deep dish pizza.

QUICHE FROM THE HEN HOUSE

Preheat oven to 350°. Spray a pie plate with nonstick oil. Place prepared pie crust in the pie plate. Crimp edges. Sprinkle 1/2 cup shredded cheddar cheese over bottom. Set aside. In a microwave-safe covered dish, steam broccoli for 2 minutes; drain. Set aside. Place chopped onion in a microwave-safe dish. Cook 2 minutes on High setting. Set aside. In a bowl, whisk together eggs, light cream, seasoned salt, and black pepper. Arrange broccoli pieces and chopped onion in the pie crust. Pour egg mixture over the vegetables. Sprinkle remaining cheese over the top. Bake, uncovered, for 45-50 minutes. Quiche is done when center is set and a knife inserted comes out clean. Serve warm. 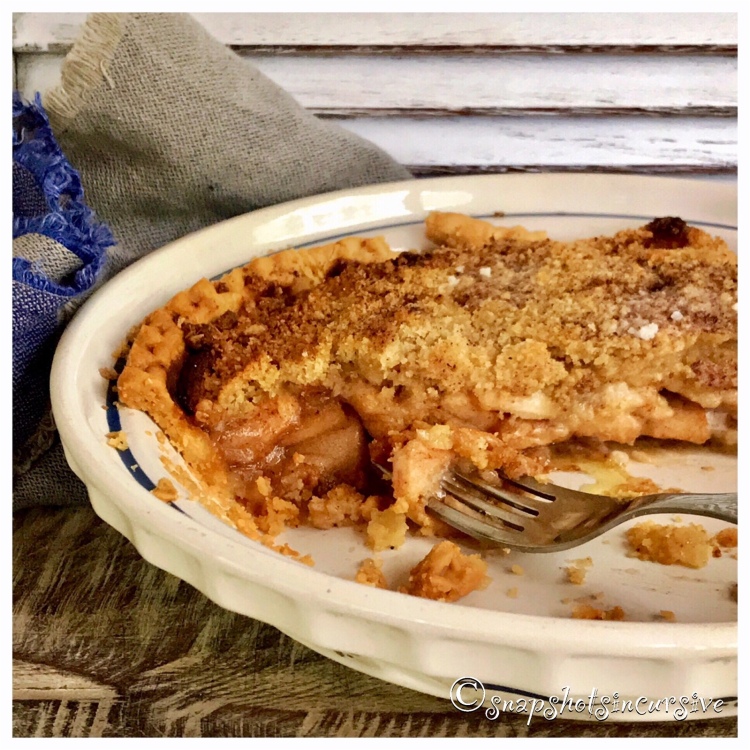 What’s Cooking in Gail’s Kitchen? Start Smart: Apple Orchard Pie! Nothing conjures up autumnal nostalgia like a slice of apple pie, still warm enough from the oven to soften a scoop of vanilla ice cream. Inhale the aromas of cinnamon, nutmeg, and allspice. It’s delectable, isn’t it? I realize making pies may not be on the top of the list for everyone who loves it. So, I’m telling you today, it’s okay to begin with a prepared pie crust. There are some pretty decent brands out there for you to try. Some refrigerated brands are made to unroll and crimp the edges; others are frozen and meant to be thawed. Some are buttery, super-flaky, and even taste as good as homemade. That’s where you’ll need the help of an assistant, or taste-tester, so to speak. Just remember, pie doesn’t have to be picture perfect to taste spot on. It’s dessert, after all.

Preheat oven to 350°. Form prepared pie crust into a pie plate that has been sprayed with nonstick oil. Crimp edges. Set aside. Combine sugar, flour, cinnamon, nutmeg, allspice, and sea salt. Sprinkle about a quarter cup of mixture over the bottom of the pie crust. In a large bowl, toss the apple slices with the remaining sugar mixture. Coat well. Transfer apples to the pie plate, forming a mound in the center. Dot with 2 tablespoons of butter. Bake for 30 minutes. Meanwhile, combine flour, brown sugar, butter, and cinnamon for crumb topping. It should resemble small peas when mixed. Carefully add the topping to the apple pie. Bake 30 minutes longer. If necessary, cover the pie with foil to prevent burning. 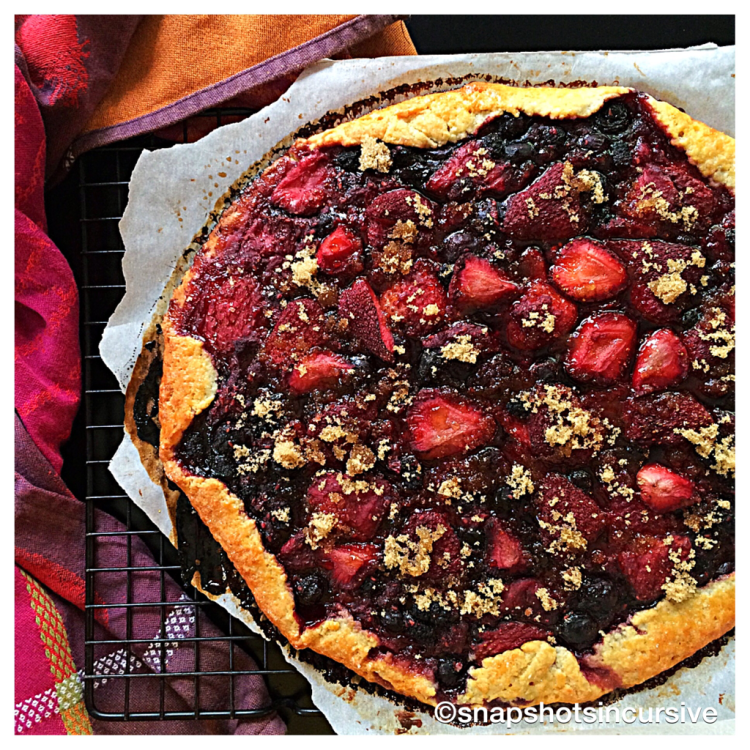 What’s Cooking in Gail’s Kitchen? Be Our Guest: Foolproof Strawberry Galette! It’s more than the sweet strawberries that make this an appealing dessert. In my opinion, the delicious buttery cream cheese crust is as good as it gets. First of all, to keep your galette foolproof, here are a few tips. Make sure the dough is not too moist or it will turn chewy instead of crisp. Pay attention to the strawberries. If they appear too juicy, add more cornstarch to help the filling thicken. And don’t overfill the galette. Remember, there is no pie plate to contain the abundance. It’s better to make two smaller galettes than a big sloppy one. And lastly, be sure to use parchment paper on the baking sheet or you may find yourself replacing bakeware from the runoff. All that being said, let’s roll.

2 pounds strawberries, hulled and cut up

Pulse flour, sea salt, and 1 tablespoon sugar in a food processor. Add Neufchâtel cheese and butter. Pulse until crumbly. Add 3-4 tablespoons of ice water and pulse just until dough forms a ball. Remove onto a lightly floured board. Gently knead to tighten dough. Pat into a disk and wrap in plastic wrap. Refrigerate one hour. Unwrap dough and roll to 1/8 inch thickness between 2 sheets of parchment paper. Create a 12″ diameter circle. Transfer dough to a baking sheet. Refrigerate for 30 minutes. Meanwhile preheat oven to 350°. In a large bowl, toss strawberries with cornstarch, vanilla extract, lemon zest, and 1/4 cup sugar. Leaving an inch border, arrange strawberries atop dough. Fold border up and over strawberries to create a rim. Brush crust with egg wash. Sprinkle with sanding sugar. Bake galette 45-50 minutes or until crust is golden. Cool on a wire rack. 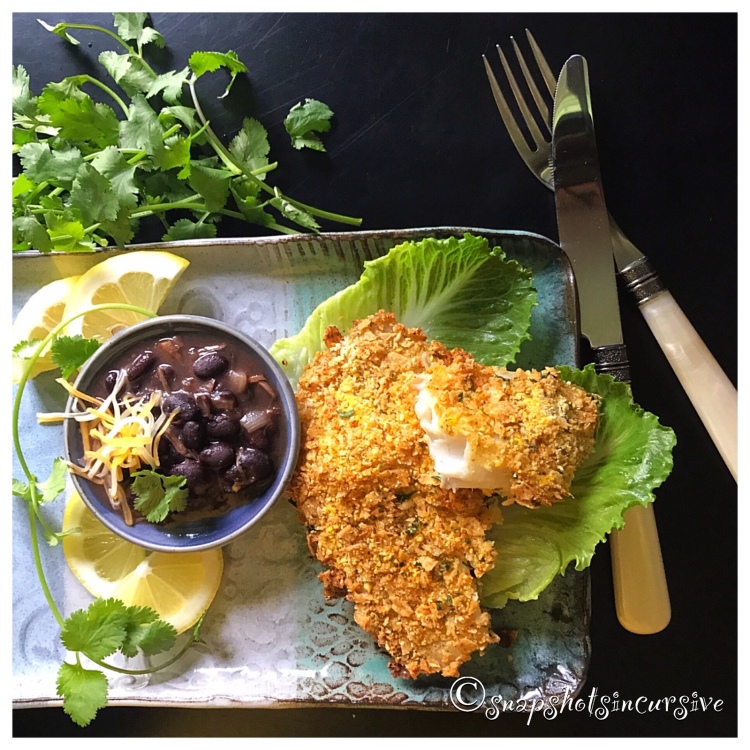 What’s Cooking in Gail’s Kitchen? The Next Step: Tortilla-Crusted Tilapia! I never thought of tilapia as an interesting choice of fish until I mixed things up with a Santa Fe style coating. The robust crunch of tortilla chips is a surprising prelude to the tender moist fish inside. It had me wishing I prepared seconds for the hubs and me. If you’re looking for a meatless meal, give it a whirl. Who knows, you may find yourself adding tilapia to the weekly menu.

Preheat oven to 425°. Spray a baking sheet with nonstick oil. Set aside. Whisk egg in a shallow dish. Set aside. On a sheet of waxed paper, combine crushed tortilla strips, natural cornmeal, panko bread crumbs, lemon pepper, cayenne pepper, kosher salt, and parsley flakes. Mix well with a fork. Working one at a time, dip a tilapia fillet into the beaten egg. Flip over to coat both sides. Press fillet onto the crumb mixture; turn over and repeat. For an extra crispy crust repeat process. Carefully transfer crusted fish fillet to the baking sheet. Continue with second fillet. Bake 10 minutes or until crust is golden and crunchy. Serve with fresh cilantro. What’s Cooking in Gail’s Kitchen? Take a Seat at the Table: Tilapia Macadamia Fillets! Tired of hum-drum meals? The crispy crunch of tropical nuts on the outside are a prelude to the moist flaky fish inside. Turning that taste into a healthy and delicious dinner option is spot on! The subtle hints of sesame, green seaweed, and Parmesan cheese add to the nutritional value making this a new favorite to try again and again.

Preheat oven to 425°. Rinse tilapia fillets and pat dry. Mix together all dry ingredients and spread on a sheet of waxed paper. Using a wire whisk, combine egg and milk in a shallow bowl. Dip one fish fillet at a time into the egg bath, coating both sides. Once wet, dredge in bread crumb mixture to fully cover both sides. Set aside and repeat for the second fish fillet. (For a crisper crust, repeat process in egg bath using all coating mix.) Place fish fillets in a nonstick pan and place to oven. Bake 8 minutes, gently turn over and bake 4 minutes longer. Do not over cook. Garnish with cilantro, lemon slice, and whole macadamia nuts. 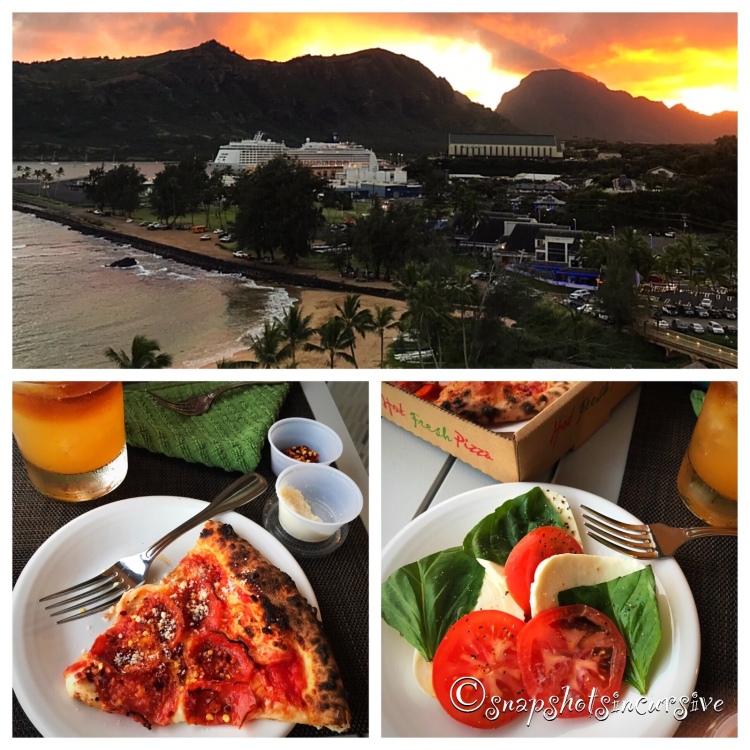 Dining Outside the Home: Pizzeria Portofino in Lihue, Kauai! If the aromas of Italian tomato, roasted garlic, and fresh basil waft through the air the second you raise the lid of the takeout box, you already know the pizza inside is going to taste good. The Americano combination of savory sauce, salty pepperoni, and gooey mozzarella cheese make chowing down come easy. Whether the crust is chewy soft or charred crisp, everyone wins at Pizzeria Portofino. That’s the beauty of ordering to please. Spend all day at the beach, then save some serious dough. Dine-in or carry out. For me? With a view like this with a private balcony, it was an easy choice to make. Eating My Way Through the Holidays! Festive Foods: Quiche Fromage! If you’ve ever been to Paris, you can’t help but be charmed by the street vendors near Norte Dame along the Seine River. One in particular featured homemade quiche specialties for picnicking tourists. There’s nothing more charming than grabbing a spot on the nearest bench for a lunchtime picnic in the midst of people-watching, that’s for sure. You can relive the moment with today’s version of cheese quiche made with a puff pastry crust. Ooh là là!

Thaw the puff pastry for 40 minutes. Roll out to fit a 10 1/2″ pie plate. Crimp the edges and pierce the bottom with a fork. Place pie plate in the freezer for 30 minutes. Preheat the oven to 425°. Line the pastry with foil and place pastry weights in the bottom. Bake 15 minutes. Remove from oven. Remove the foil and pastry weights, pierce dough again if needed, and bake 5 minutes longer until bottom is golden. Set aside. In a bowl, whisk together eggs, crème fraîche, light cream, Herbes de Provence, seasoned salt, and black pepper. Fold in cheese crumbles. Spoon mixture into the pastry crust. Bake 30 minutes until the filling is golden and the crust is puffed. To test for doneness, insert cake tester. If pick comes out clean, the quiche is baked through. Serve immediately. Enjoy with a glass of Pinot Noir. 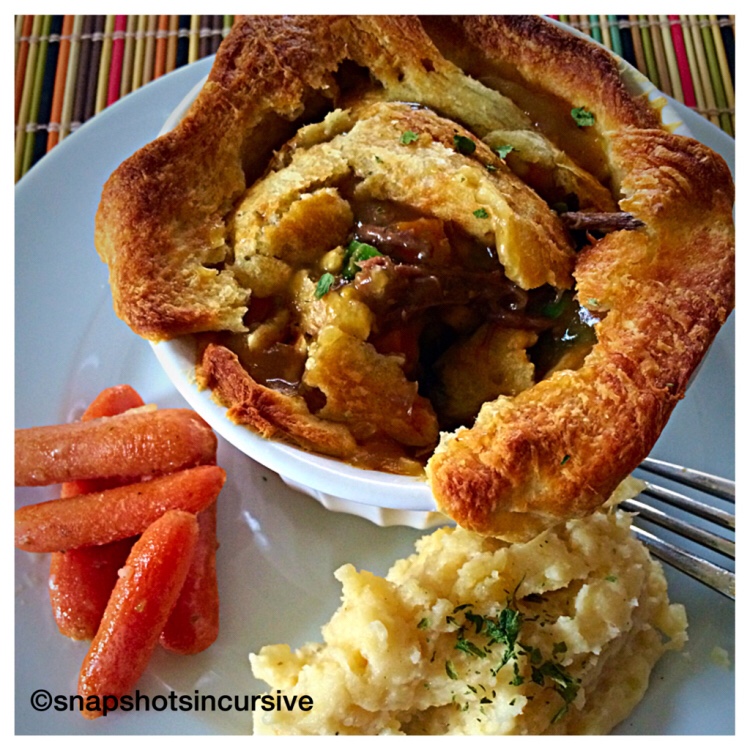 What’s Cooking in Gail’s Kitchen? The Joy of Eating: Upright Pot Pie! Do you ever have those nights when you can’t decide what to cook for dinner? You look in the refrigerator and all you see are leftovers? Again? Well, I had made a beef pot roast earlier in the week, so all the ingredients were on hand to make individual servings of pot pies. Obviously, if you don’t have mashed potatoes and gravy on hand, you can improvise. Keep it upright by filling custard dishes with single servings and then top them off with crescent roll pastry sheets. It requires very little effort, but the taste is home cooking at its best.

Preheat oven to 375°. In a large skillet, sauté onion in olive oil over medium heat. Add beef and stir. Reduce heat and gradually add gravy and mixed vegetables. Spoon mixture in ungreased single serving custard cups. Transfer cups to a baking sheet, in case they bubble over while baking. Remove dough from tube. Do not separate into triangles. Place one square over each custard dish. Press lightly around edges. Bake for 15-20 minutes until crust is golden brown. Serve with mashed potatoes and baby carrots.