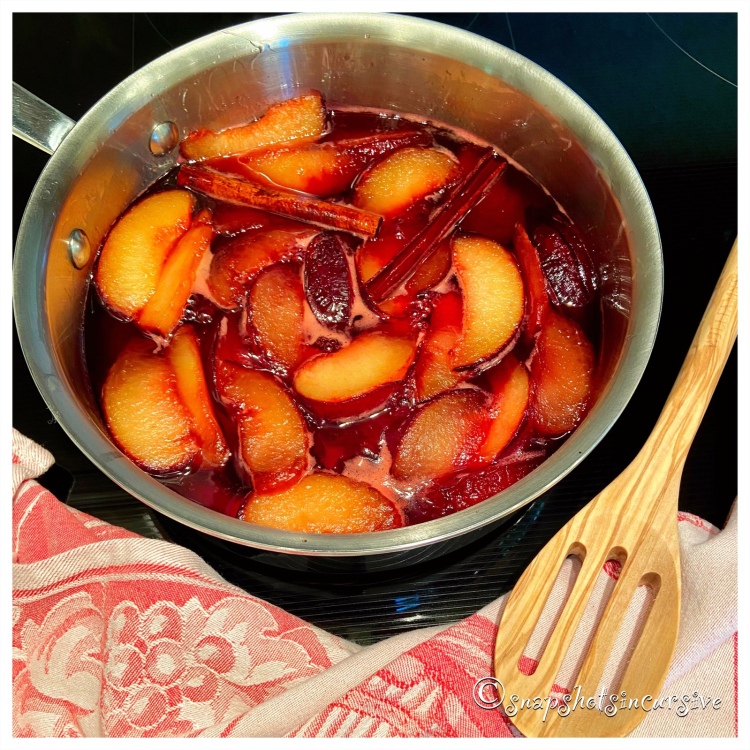 What’s Cooking in Gail’s Kitchen? After the Holidays: Caramelized Plum Sauce! A plum is one of those fruits whose skin is incredibly tender and easy to bite into. It offers a slightly tart taste before the sweetness of the flesh engulfs your senses. When I was a teenager living in Nebraska along the Missouri River, I remember puttering along winding country roads in the grain belt on a late summer afternoon. The weather was hot and humid, so the windows were rolled down on the beat up 1962 Plymouth Valiant that had seen better days. An irritated cicada beetle was screeching from the glove box where my boyfriend had tossed it after seeing it land on the front seat. I turned my head away to look beyond the car’s front fender when I saw a small native tree bursting to its limit with sweet, ripe, purple plums. “Look!” I exclaimed pointing my index finger, “It’s just like the plums in the grocery store!”

Cut stone fruit in half. Remove pits and slice into segments, leaving skin on. Set aside. In a large skillet, warm butter over medium heat. Do not scorch. Add brown sugar, cinnamon sticks, and raw honey. Stir. Bring to a simmer. Gradually add sliced plums; gently tossing to coat. Continue simmering for 5 minutes, stirring occasionally. Fruit will turn tender, not mushy. Remove pan from heat. Set aside to cool slightly. Spoon caramelized plum sauce over vanilla bean ice cream. Serve immediately. Once the sauce is cool, pour into a glass jar. Cover. Store in the refrigerator up to one month.